After working in a safety-related field for more than 20 years, it finally dawned on me one day that safety and quality are flip sides of the same coin. They are both largely subject to human error. This, then, begs the question: Are there things we can apply from the field of Safety to improve Quality?

It is a safety truism that roughly 80% of accidents are caused by human error. However, in looking a bit deeper at human error, the US Department of Energy found that about 70% of human errors were actually attributable to organizational weaknesses.

Yes, humans make human errors! But blaming someone for being human isn’t very helpful – especially if the error was foreseeable. In The Field Guide to Human Error Investigations, author Sidney Dekker says “human error is a symptom of trouble deeper in the system.”

Such trouble might be in the form of a “Human Error Trap” – i.e., a condition or circumstance that provides fertile ground for mistakes to happen. Top human error traps include:

The list contains some intriguing possibilities for their application to quality and strategies for mitigation. Should one eat first and then go for a walk in the second half of their lunch hour, rather than vice versa? Should one make the extra effort to get work done before leaving on vacation so that critical work does not have to be done the first few days back?

Human errors can be grouped into 4 categories as listed below:

Error trap examples for each group are shown in the quadrants of the matrix below. The groupings give insight into the kinds of things that can be done to exert influence in each area. The more related the traps are to the specific person and task, the more influence can be exerted to affect the outcome. Conversely, the more the trap is related to human nature and tasks in general, the more difficult it would be to exert effective control. 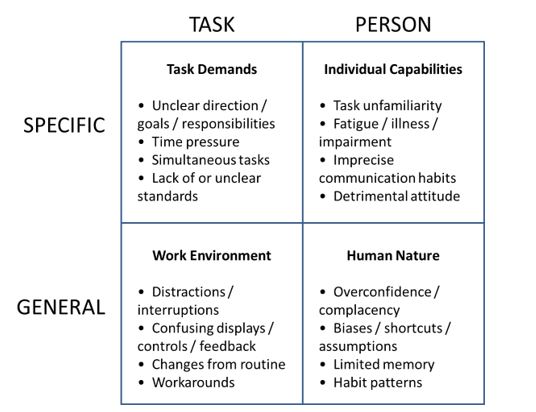 When searching for ways to prioritize and reduce human error, one further dimension to consider is in what “performance mode” the specific person doing the task will be working in.

It is a bright, dry, clear morning, and you are taking your usual route to work. Traffic is smooth today – but you don’t really notice because you are listening to someone on the radio talking about a topic of great interest to you (say, investments and retirement planning). The person is relaying some fascinating facts that you want to make sure to remember, all while you are contemplating possible actions to take as a result. And as you glide into the parking lot where you work, you sort of wake up and wonder how you got here. And the strange absence of other cars in the lot immediately snaps you back to reality: it’s Saturday, and you were headed to Lowe’s. Oops. Human again!

The error trap here was Distraction. Despite being in Skill-based performance mode, your own thoughts about non-task related matters put you in “autopilot”, and the visual cues early along the route you were driving said you were going to work, which is why you missed the turn you should have taken to Lowe’s. You probably wouldn’t have made this mistake with other cues present, such as wearing the jeans with the hole in the knee and driving the old dirty van instead of the commuting car.

Human error traps are leading indicators of trouble, whether in the safety or quality arena. Be on the lookout! But also design your processes and systems with the most likely traps already in mind, making the system conform to the people, not the other way around. Make it easy to do the right thing. Make it hard to do the wrong thing. And also make it so that doing the wrong thing doesn’t lead to catastrophe.